Below are the meetings dates for the GPSA for 2023. All meeting are held on the third Monday of the month in the GPSA Room at Massari Arena. Dates are subject to change if necessary.

If you have any questions about the nominee's application, please email Jerry Sisneros (jrrysis@yahoo.com), President of the GPSA. The deadline for nominations each year is Aug. 1.

Welcome to the GPSA!

The GPSA's 50th anniversary induction banquet was livestreameed on  Wednesday, Nov. 16, at 7 p.m.. The event took place in the Occhiato Ballroom on the Colorado State University Pueblo campus.

The Pueblo Greater Sports Association (GPSA) celebrates its first 50 years with a video narrated by Michelle Buttram, a student news anchor for Pueblo Centennial H.S. and shown the night of the 50th Anniversary Banquet (Wed., Nov. 16, 2022). The video talks about the organization's existence from several current GPSA members and where it hopes to go for the next 50 years.

The 2022 Greater Pueblo Sports Association hosted its 50th Hall of Fame induction ceremony Wednesday night at the Occhiato Ball Room on the campus of CSU-Pueblo. This year's inductees included some great names in Pueblo history.

Also included in the night's festivities were the awarding of the Outstanding High School Athletes (Brian Macartney Awards), the Sollie Raso Award, and the CSU-Pueblo Outstanding Athletes. The ceremony also recognized three of the greatest moments in the past 50 years of Pueblo sports history... Read More 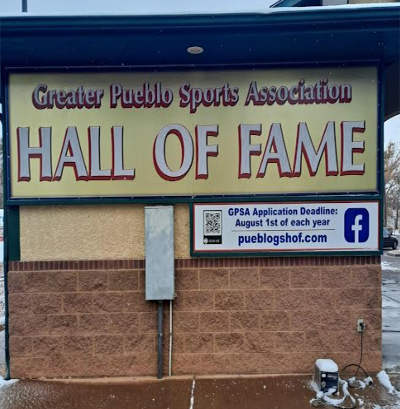