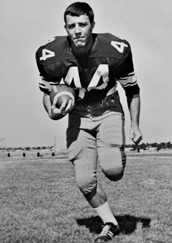 Achievements:
College:
● Played slot/wing back during freshman season as the team went 4-0.
● Second on team receiving catches/yards.
● Offered a pitching spot on the Buffaloes baseball team, but declined.
● During sophomore season, moved to LB and suffered a season-ending injury during the 1972 season.

Friends of Football:
Founding Member; Treasurer, Board of Directors; 2007 – Present.

Personal:
Life-long Pueblo resident (67 years) … Married to Shari Taibi… Joins brother, Carl Taibi, who passed away on 8/22/2021, in the GPSA Hall of Fame.

GPSA "T" By The Numbers